Farms For Sale in Namibia 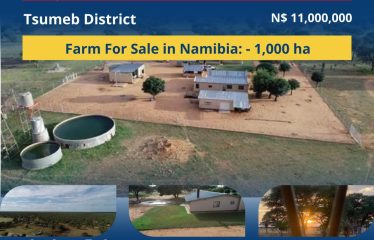 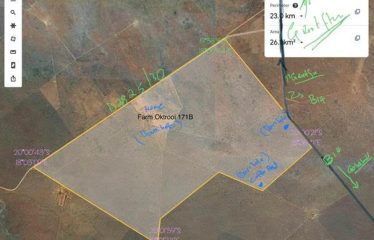 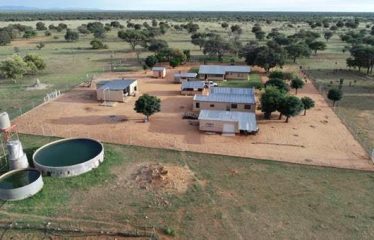 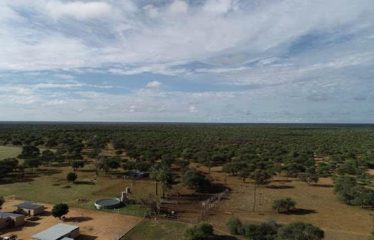 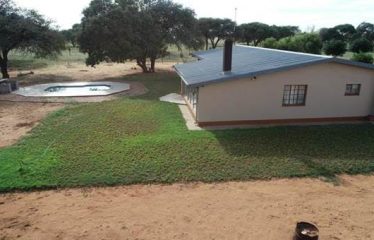 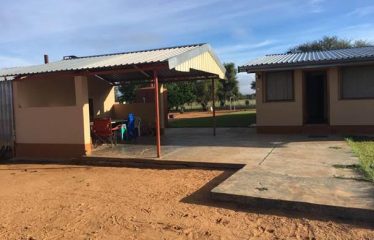 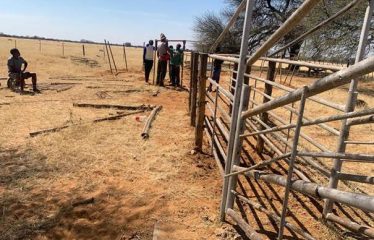 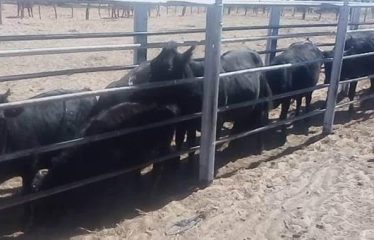 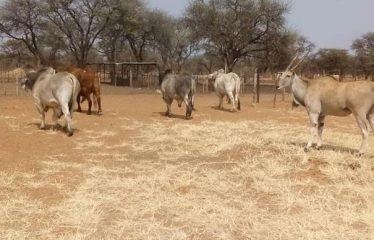 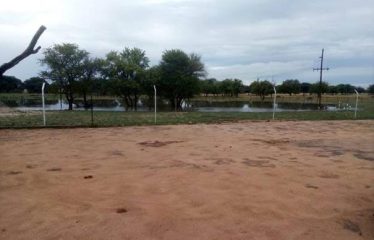 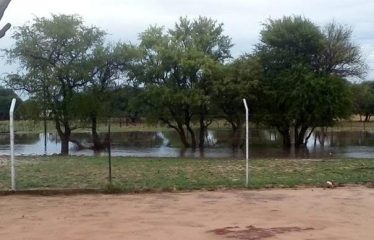 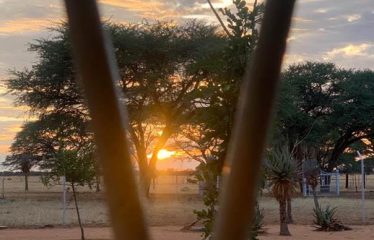 I am privileged to offer this exceptional property on the open market. The entire operation is very well designed and geared for low maintenance with a minimum of effort.
The farm is multi-functional. It is suitable for cattle and small stock production, game farming and irrigation.

The main farmstead
The main farmstead is very neat in a setting of the African tree savannah. The entire setup is functional, generously designed and pleasing to the eye. The main dwelling is new, with a footprint of about 210m². It has an entrance foyer, lounge, kitchen with pantry, three bedrooms with built-in cupboards, separate toilet, bathroom with shower and bathtub. The master bedroom has aircon and en-suite facilities. Family room with modern built-in braai with view over swimming pool area and large well-kept lawns. At the pool is a hot water donkey and outside shower and toilet for guests. The old dwelling, about 190m² big was built in 1934 and has recently been renovated. It offers lounge with hearth, kitchen, and pantry, three bedrooms, two bathrooms with toilet and shower and an office.

The entire farm is surrounded by 2,3m high game proof fencing. There is an interior 150-hectare game camp including a 50-hectare cleared grassland tract. This tract is currently stocked with a few eland and oryx for easy game-viewing, but it can easily be repurposed for either dry-land agriculture or irrigation. There are 10 interior camps for stock farming with five waterpoints. Each water point is connected by a management corridor.

This is very strong and sweet with a shallow water table. There are three functional boreholes, the one at the house is equipped with a three-phase submersible pump, plus a standby windmill. At the outpost is a windmill and a third borehole is on standby.

The borehole yields are given as follows:

The structural improvements are geared towards maximum utility of sources of income potential at hand. Not many properties in the country have the potential of having several different income streams at their disposal:
Trophy hunting: the entire farm is ring fenced with game proof fencing plus a 150-hectare interior game camp. The farm is stocked with kudu, oryx, eland and warthog.
The numbers are unknown.
Game Numbers
According to the owner these are healthy

Game breeding
This can have a beginning in the interior game proof fence. Game breeding of the small five needs to be investigated. These are Damara dik dik, steenbuck, red duiker and grey duiker. (Klipspringer not present) All these species are found on the property and would form the basis for future breeding stock. Venison production could be a profitable side-line.
Wood harvesting: this not only improves the grazing capacity of the rangeland; it also provides labour opportunities as well as an excellent income.
Agriculture: Dry land and irrigation

The outstanding topographical feature is the undulating thorn tree savannah on a deep, rich, red loam soil. Much of the soil is deep red arable sand/clay soil which is water retentive and has a high vegetation carrying capacity. Other parts have higher clay content. Here the volume of grazing is lower, but the nutritional value of the grass species higher. The Farm is located about 50km south of Grootfontein and still forms part of the water rich Otavi Highland basin. This fact was referred to the doctoral thesis of Christoph Külls of the Juluis Maximilian University, Würzburg, Germany in 2000. The dissertation was titled: “Das Grundwasser am Nord-west Rand der Kalahari, Namibia
The trees are plentiful Camel thorn (Acacia erioloba), Umbrella thorn Acacia tortillis), Swarthaak(Acacia mellifera), Kalahari Apple Tree, Sekelbos (dichrostacis cinera), Shepherds Tree (Boscia albitrunca)
The fodder bushes are plentiful and varied. Combined, the vegetation is drought resilient and responds to a minimum of rainfall. Bush is known to respond to rainfall quicker than grass. This has proven true in the past rainy season which was not optimal at all.
The grazing capacity is officially 1:8, meaning one large stock unit to eight hectares. That means that the grazing capacity theoretically allows for 326 head of cattle, or 1,956 small stock or a combination thereof. Mixing browsers and grazers allows for a much higher stocking rate. This is especially true for game.

This property will have low overhead expenses, due to its accessible topography, sufficient water, and existing infrastructure, which is superbly built.

Possession of this information is of a confidential nature. It is binding on the client insofar that the client has been introduced to this property by us and we would be the effective cause of any sale of this property to the reader.

Mixed use farm for sale in Tsumeb District

For Sale: Section of a Farm in Brakwater